Cyanobacteria, also referred to as blue-green algae, is a growing problem that is proving to be lethal to dogs. It is a bacteria found coast to coast fueled by warm climates, and it’s especially prevalent in the south in the summer and fall months. Particularly susceptible are warm, undisturbed bodies of water. Blue-green algae can even bloom in your backyard pool and puddles! It produces a neurotoxin that causes catastrophic damage to multiple organs in record time. According to the CDC, cyanobacteria can be found in fresh and saltwater.

To humans, the smell of cyanobacteria ranges from nothing at all to absolutely nauseating.  If a dog swims in the water and swallows the algae, they can die within mere minutes. It should be noted though that the symptoms may not appear for several days in some cases.

Keeping your dog out of the water may not be enough. Dogs can also find the algae crusts along the shore and ingest them. They can even ingest lethal doses simply by licking the water off their bodies or anything that has come in contact with the contaminated water such as tennis balls or frisbees.

This is a scenario Melissa Martin knows all too well. She recently shared her family’s horrific loss on Facebook.

“Abby and Izzy had the most fun tonight chasing the ball and each other and rolling in the mud. What started out as a fun night for them has ended in the biggest loss of our lives,” Melissa said.

Spreading Awareness After an Unimaginable Loss

Melissa recalled the story of taking her three dogs to a local pond. Soon after arriving back home, they thought Abby, one of their beloved Westies, had been stung by something, so Melissa rushed her to the emergency vet. Within a few short minutes, Izzy and Harpo followed.


“The Westies were really out of it, constantly seizing and unable to breathe well, so we decided we would let them go together peacefully. In the process, Harpo started to go down hill soon after. They let us come in and see them. Harpo immediately started responding and trying to get to me. The girls were lifeless already. We were able to hold the girls and transition them out peacefully.” 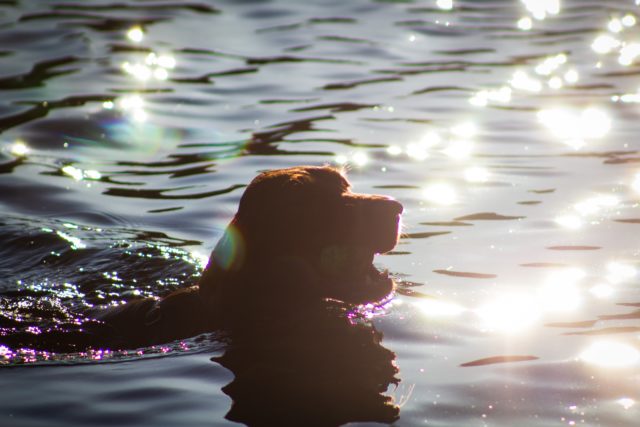 “Then they let me hold Harpo and talk to him and he just looked at me with tears in his eyes. He was so scared. The vet said that he was suffering and his chance of survival with no liver failure and internal bleeding was very low. I talked to him and asked him to let me know. He did. I held him and told him how awesome he was, and reminded him of all the lives he touched. Then we let him go,” Melissa painfully shared.

Unfortunately, there is no known antidote for cyanobacteria poisoning.

Looks Can Be Deceiving

While the algae can often be described as looking like pea soup, Melissa Martin points out that wasn’t the case when she took Harpo, Abby, and Lizzy for a swim.


“If you search blue green algae, you see pictures of nasty water. That is false! The place our dogs played for their last time was crystal clear except for what appeared to be debris from foliage. Do not let your dogs near standing water. Our Westies didn’t even get in the water but played in the mud at the edge.”

The only thing you can do to ensure the safety of your fur babies is to avoid these bodies of water altogether.

If you think your pup has come in contact with blue-green algae, wash them immediately and take them to the vet. Make sure to wear gloves when bathing them because cyanobacteria can also be toxic to humans. According to the ALS Association, blue-green algae is actually thought to be linked to ALS.

According to the Pet Poison Helpline, symptoms to look for include:

While you want to spoil your fur babies and enrich their lives with as many experiences as possible, please be vigilant and cautious if you plan on taking them to swim.

Some community pools offer dog days and many doggy daycares now have swimming pools for pups. These are safer options that give your little ones a fun and safe experience and give you peace of mind.

This Amazing Man Has Dedicated His Life To Rescuing Senior Dogs

Dog And Owl Friendship Brings Smiles To The Self-Quarantined Masses